How to use Vue.JS and Django

Lately, I have been seeing an increasing amount of questions specifically regarding the use of Vue.JS in Django. In this tutorial, I will go through two options on how to use Vue with Django. There are more options, but these two are the most straightforward and probably easiest to use/set up.

For the sake of not having to scroll through all the text:

1. Use Vue.JS and Django separated

In my opinion, this is by far my favorite of the two. We will be able to use both Vue and Django to their full potential. The downside of this is that there is generally a bit more work involved in both setting it up and using them. You will also need to learn to become good at both of them to really get the best of both worlds (you could also outsource either the frontend or the backend).

Create a new folder and start a new Django project in that. In case you don't create projects that often, here are a commands on how to do that (Mac/Linux):

Which should result in this:

Also, note that I am calling this Django project back. I do that on purpose. We will call the front end part front. You are free to change the names of course, but I've always found this to be a good approach.

Then we need to open up a new terminal window and create the front end. For this, you need to install Node and NPM. I will not get into the details of that. Once you have done that, you can move on with the instructions below.

Run npm install -g @vue/cli to install the CLI we need for Vue. Once you have installed that, run this:

If it asks you to install Babel/eslint, then just hit return. It will need a minute to create the template.

Do what it says and enter cd front and then npm run serve.

You will now get to see a local address (probably http://localhost:8080/). If you go to that, then you will see the default Vue page. The CLI also added a bunch of files in our newly created front folder.

Within Django, we will now create a new app and install Django Rest Framework (DRF). Don't forget to add the new app to INSTALLED_APPS in your settings.py file.

In your settings.py file, add this to INSTALLED_APPS:

Also add this in that same file to make CORS work:

You will also need CORS if you decide to set up the API server and the Client server on a different address. In some ways you can combine the two on one server, but in many cases it's easier to separate the two.

At last, add this line at the top of your MIDDLEWARE array:

In our notes app we'll add the following (I will explain it underneath):

models.py: we create a very simple model. Not much to explain here.

urls.py: if you have never worked with DRF, then the router part might be new. It's not that hard actually. We create a new router through DRF, this will create the necessary endpoints for us to use in Vue. More details on this later.

serializers.py: a serializer will help us pick the data we need from the model. This will serialize the query that we get from the database, which is then pushed through the view to the url.

views.py: This will serve multiple endpoints. Getting all notes, specific notes (through the id) and even post or delete notes.

The urls aren't added to our main urls.py file, so we need to do that to make the urls available to use. Go to back/urls.py and change the file to this:

At last, we also need to migrate the new Notes model to our database:

When you go to http://localhost:8000/api/notes, you will get something similar to this: 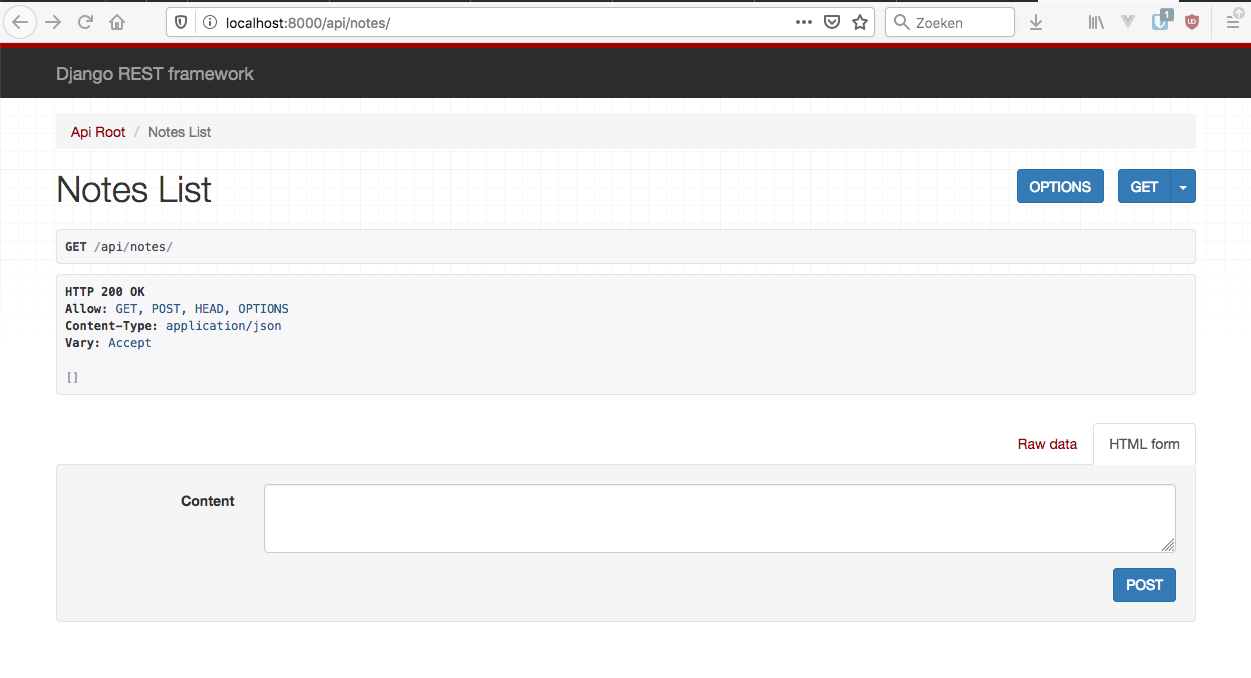 Create a note there, so we have something to work with in Vue!

Deployment for this might be a bit more tricky. If you are considering using different domains, then you will also need this: https://github.com/adamchainz/django-cors-headers

Making requests to Django through Vue

Now that we have an endpoint to work with, we can go to the Vue project and show it there. We will keep it simple here. If you need a much more detailed tutorial, then consider buying my Django and Vue course!

In Vue, we need to install a library to make it easier to do HTTP requests. We will go for the standard, which is currently, axios. Install it in your vue folder:

The front/src/App.vue file is the base of our application. We will have to modify it a bit to get the info from the API. This can be done by adding this part to the export default part, right under the components part:

add this at the top, right under the <script> part to import the axios library:

When you reload the page, you should see the data that the API throws back at us. At least one note. Now we can almost use that in our app. First of all, we need to assign it to a variable to be able to use it in the <template> part. Replace console.log(response.data) with this.notes = response.data. That will assign the data to the notes variable, but that variable doesn't exist yet. Add this part as well:

That's it. Now you are showing data from Django in Vue. Now, this is only the very tip of the iceburg. There is so much you can do with Django and Vue! Again, if you are interested, definitely check out my course about Django and Vue, where I explain how to work efficiently and clean with those two awesome frameworks.

2. Use Vue.JS in Django templates

The other way to use Vue in Django is to simply import the Vue.JS library and then start coding. Here is how you can do that.

Import the Vue.JS library. Preferably at the bottom of your template (right before the </body> tag), import the library with this line of code:

Up next, we will have to define what part we want to manage with Vue. We will have to give that a specific id. The general approach is to go for the #app id (but you can use anything, as long as you are consistent). That would look like this:

At the bottom, right under the script import, we can start coding with this little bit:

The el: '#app' is the part that will refer to the div we added.

We can then show the message variable in our data part with this code (within #app):

But wait... there is an issue there. Django uses the same {% raw %}{{ }} for variables that are passed down from the views. We will have to change the ones from the Django template language or Vue, otherwise, the Django template language will always render them first and Vue won't be able to do anything with them anymore. It's best to change the Vue ones by adding delimiters:

And voila! It works:

Personally, I try to avoid this wherever I can, except when I only have a very small bit of Javascript that I want to implement. Those times, I generally go with vanilla JS instead of Vue though. All-in-all, I rarely use Vue this way.

Stan is professional web developer working mainly with Django and VueJS. With years of experience under the belt, he is comfortable writing about his past mistakes and ongoing learnings.